„Under the patronage of Vice Mayor, City Councillor, Minister (ret´d) Lois Weinberger a medical doctors' ball will take place on the 24th of February 1949 at 9.00 p.m. on premises of the Vienna Konzerthaus which has been organized by the hospital physicians section of the Vienna Medical Chamber. We take the liberty to invite all doctors, their families and friends to this ball.“
This announcement in the 2/19149 edition of the Vienna Medical Chamber information was the beginning of a ball tradition that, with the exception of two, has continued until today.

A dark suit is sufficient

That the ball was organized not by the Medical Chamber as a whole but only by the section hospital physicians is not the only thing that seems strange today. The dress code was more informal. At that time "dinner jacket or dark suit" were sufficient.

Today a suit - whether dark or light - is not conisdered acceptable. Dinner jacket is now standard, tails if not specifically requested are still appreciated by the ball organizers.

The chronicles tell us nothing about the ticket price at the time.

In any case, the location for the first Vienna Medical Doctors' ball was the Vienna Konzerthaus. Even then there was an announcement for a "midnight performance". This was performed by "Die Kleinen Vier" (the small four). The author (not mentioned) didn't seem to think that it was worthwhile mentioning this interlude in the report on the first Viennese Doctors' Ball.

That is surprising as, along with Hedy Faßler, Fred Kraus and Willi Hufnagl, a certain Gunther Plachetta - better known under his stage name as Gunther Philipp - also appeared. He was already popular at the time, as he made his living as an actor. He had also studied medicine and was even sometimes mentioned in the doctors register.

The times were hard and the decision to organize a doctors' ball was certainly not easy for those responsible. On the other hand we can read in the official report on the ball „the hospital physicians section of the Vienna Medical Chamber and especially the ball organizers, Assistant Doctor Mazanek and Doctor Dolinar have to be thanked for their courage in successfully organizing a doctors' ball in spite of all scepticism and objections. The proof that their idea was correct lies in the fact that due to the 4,500 visitors the police had to close the Vienna Konzerthaus due to overcrowding.

There must have been a great desire at the time for the Viennese to look towards the future after the horrors of the war.

Success makes courageous. It is therefore no surprise that the organization of the second Vienna Medical Doctors' Ball on the 16th of February 1950 was removed from the pioneers in the section and incorporated into the general responsibility of the Vienna Medical Chamber, even though there was still an exceptional position for hospital physicians. For exanple in the programme for the fourth Vienna Medical Doctors' Ball on the 23rd of February 1953 (there was no ball in 1952 due to "great financial risk")  there were reduced ticket prices but not, as today, for students  - but, of course, for hospital physicians. The had to pay 25 Schillings, for everybody else it was 40 Schillings.

Service for members was also a priority at that time : "As the ball management is aware that especially in the first quarter of the year specialists and general practitioners have a heavy workload colleagues will be contacted telephonically on the 7th of January 1953 to ask if they wish to order tickets. Tickets ordered wil be delivered by messenger.

It can be assumed that the number of guests from the federal states and abroad was limited otherwise a messenger delivery was hardly possible.

The admission prices remained stable for a long time. Only for the ninth Vienna Medical Doctors' Ball on the 18th of January 1958 was there a moderate price increase to 30 respectively 50 Schillings.

In the course of time the view of the ball organizers in regard to the solemnity of the event seems to have changed, as the reports (3/1956) on the seventh Medical Doctors’ Ball stated that „the evening dress of the gentlemen tends towards more tails and dinner jacket.“ Eight years later at the 15th Vienna Medical Doctors’ Ball on the 25th of January 1964 this was required for the first time. 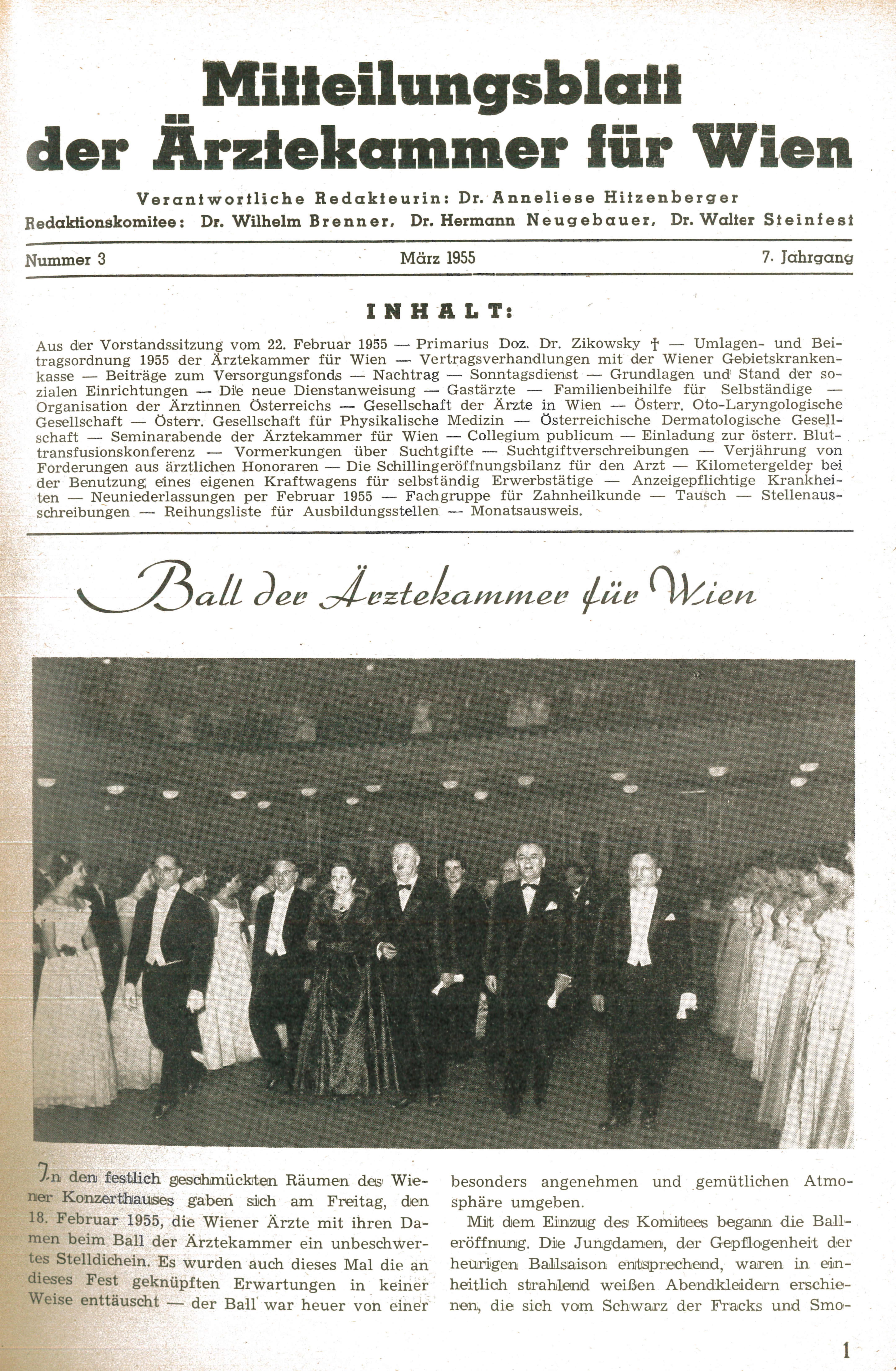 Newsletter of the Vienna Medical Chamber 1955

The 14th Vienna Medical Doctors' Ball on the 26th of January 1963 was a turning point in many respects.

The 14th Vienna Medical Doctors' Ball also marked the end of the unique position of the hospital physcians. The previous year they could buy cheap tickets (40 instead of 70 Schillings), now in 1963 there was a uniform price for all doctors although more expensive: 160 Schillngs at the box office respectively 120 Schillngs for advanced bookings.

The 19th Vienna Medical Doctors' Ball on the 27th of January 1968 is also worth mentioning. The chronicles reported an "imaginative choreography" during the opening and "the splendid singing skills" of Lotte Rysanek and Monique Lobasà as well as messrs. Holecek and Minich" during the midnight interlude that "together with the performance of the ballet brought a storm of enthusiasm from the public."

For the first time Fred Mastaires was responsible for the midnight interlude („Ha, welch ein Fest“ from Fledermaus) even though he was not yet responsible for the whole artistic managment of the ball (this was still in the hands of the legendary dancing school owner Willy Fränzl) but the midnight interlude found enthusiastic reports: "the audience was shoulder to shoulder in the ballroom and it happened that especially "tall" gentlemen lifted their ladies on to their shoulders so that the optical pleasure could enhance the musical."

Elsewhere the chronicler, Hans Dolinar, wrote enthusiastically "the history of the doctors' ball reflects the 20 years of post war history of our professional body: the reconstruction in the forties and fifties, when our balls were held in the Konzerthaus; then the strengthening in the sixties when on the intiative of President Dr. Frizt Daume the ball was moved to the Hofburg and finally the splendid highlight of this year's jubilee, that reflects the well earned rise in our profession".

VIPs have the honour

Further examples of the illustrious flock of guests of honour during the long history of the Vienna Medical Doctors' Ball: Theodor Körner, Leopold Figl and Bruno Pittermann.

By the way, after 1952 the Vienna Medical Doctors' Ball was once again suspended in 1991. The reason was the invasion of Kuwait during the second Golf war by the a coalition lead by the USA. The unclear safety situation prompted the organizers of the Opera ball to cancel. Many other ball organizers did the same. The risk was also to great for the Vienna Medical Chamber: the doctors' Ball was cancelled and paused for one year - like almost all other large traditional Vienna balls.

Much has changed since the beginnings: the basic economic situtaion, thre professional requirements for the medical profession , the working environment in general.

Innumerable guests of honour have attended until now. A series of Medical Chamber Presidents were hosts, the midnight interlude and dance bands have changed according to the zeitgeist. One thing has remained: the numerous ball guests that enjoy themselves on the dance floor, in the bars or at tables and in the corridors of the Konzerthaus respectively the Hofburg. 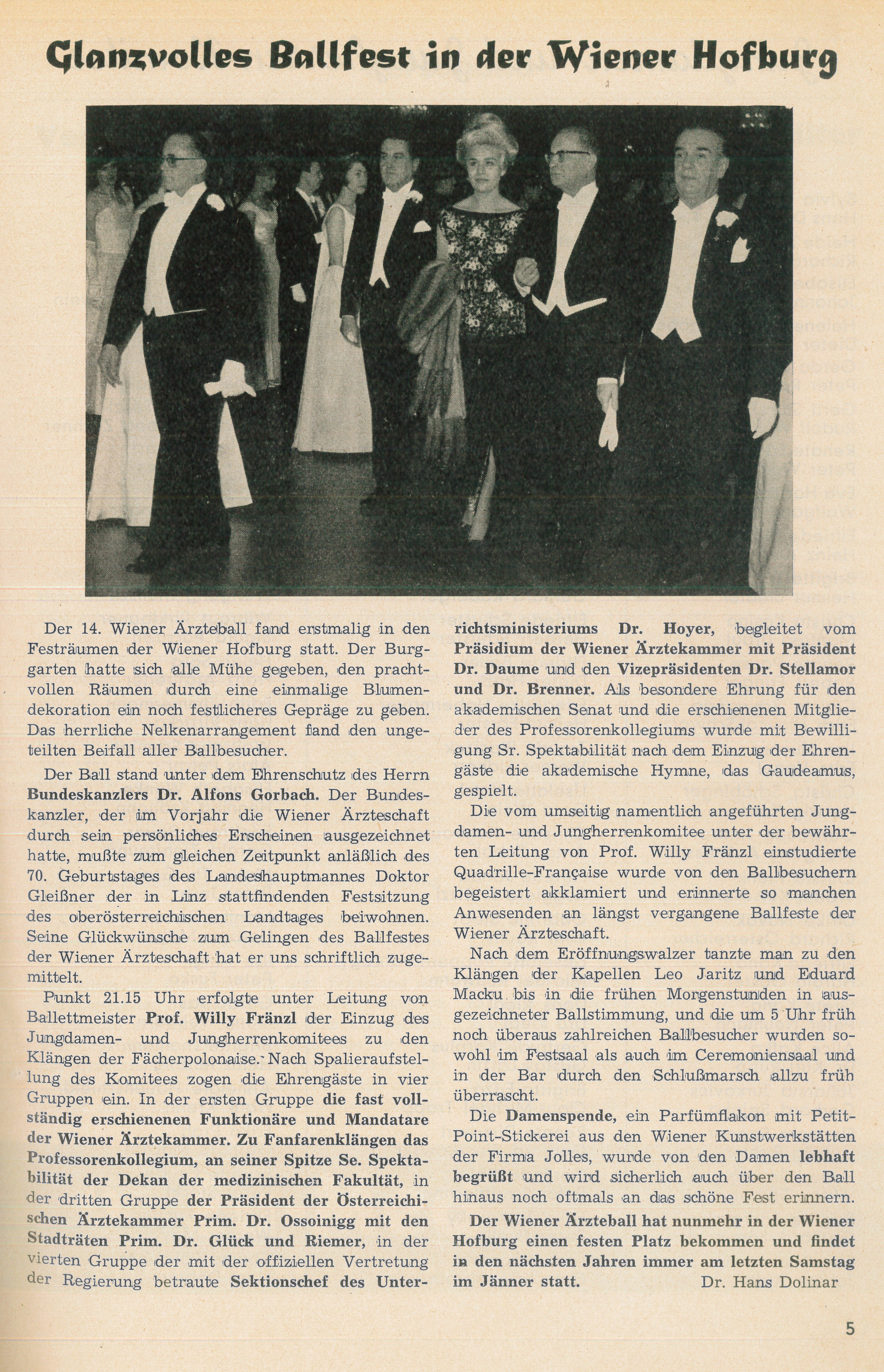